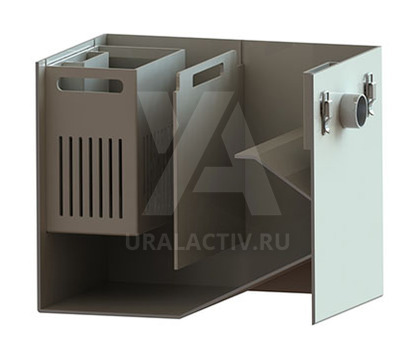 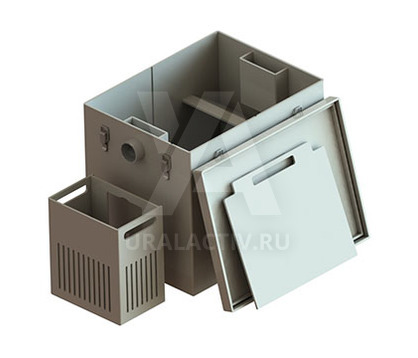 Sand traps are used by the treatment capacity exceeding 100 m3/day. They are mounted before the primary settler after grating.

Grit chamber serves to remove sand and its associated components in the Surface Run-Off Sewer Collection System. At the same time the equipment can collect bigger particles: rubble, different solid impurities,shingle. Different solid components and organic compounds can mix in the settlers and this process can cause problems with sludge removal. The operation of grit chamber makes easy the cleaning of settlers by removal of 80-90 % solid impurities.

Grit chamber is equipment intended to clean sewage from the mechanical impurities in the public catering facilities. These chambers clean sewage from small and big mechanical impurities. It is recommended to mount the grit cambers in the workshops where may be a risk of ingress of big garbage into the wastewater disposal system, for example in salad or vegetable shops.

Functionally the grit chamber for installation under the washer is a waterproof container with separating plates and quick-release tray for catching big and small garbage inside. Smaller suspensions are settled on the second cell of grit camber. All sand traps are supplied with cover with comfortable latch bolts and rubber gasket to prevent smells and to handling the device.

Sewage water out of washer or other devices flows through the inlet pipe into the perforated delivery tray of grit chamber equipped with flow damper. Because of sharp increase of the flowing section the flow velocity decreases in direct proportion. All suspended particles with fraction more 2 mm are settled down in the tray and simultaneously the slackened flow distributes equally into the first cell of grit chamber due to symmetrical side perforation. Then the sewage water flows slowly under the first partition of grit chamber and enters in the sediment chamber. There happens the displacement of settled (the most clear) water into sewerage system because of special internal design (separating plates). At the same time new water arrives to be settled. Internal design of grit chamber prevents the effective mixture of new arrived sewage and settled water. Thus the displacement of cleaned water with new arrived water happens by the next discharge and the cycle reruns. Outlet pipe of sand trap is equipped with distributing pocket to prevent the accidental removal of floating garbage to sewerage system.

All structural components of grit chamber may be detachable to make easy the handling of equipment! 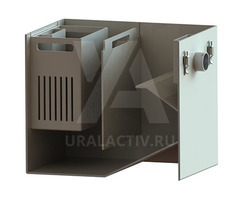 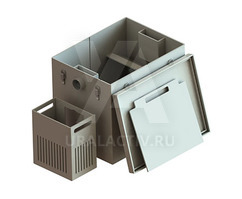