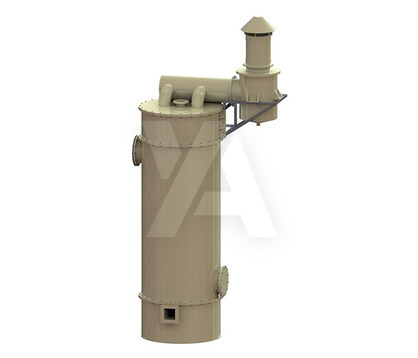 Ask a question or order the product

Decarbonizers are designed to remove free carbon dioxide which dissolved in water, the superfluity of that can be causes corrosion of the metal and the destruction of rammed concrete.

Decarbonizers are using in the next water treatment schemes

The decarbonizer is a column which filled with a cap.

At the top, on the lid of the tank there are nozzles for supplying decarbonized water and air outlet to the decarbonizer through the nozzle which located in its lower part.

In the low-bottom part of the tank placed nozzles for the output of decarbonized water and drain into the drainage.

The main acting principles of Decarbonizer

Here using the desorption process, the transmission of carbon dioxide which dissolved in water from liquid to gaseous phase.

The amount of carbon dioxide which have been released during desorption largely depends on the surface of the contacting liquid and gaseous phases.

If larger the surface, therefore the greater effect of this excrection.

The increasing of the surfaces of the contacting phases is carried out using Pall rings in the decarbonizer, which, due to their shape, have a large working surface.

The main operating principles of Decarbonizer

Decarbonized water through the inlet pipe nozzle enters to the upper part of the decarbonizer, from where it falls onto the nozzle with separate jets.

Spreading over the nozzle with a thin film, water flow rushes down.

The coming air flow from below side carries away carbon dioxide emitted from the water, which exits through the upper nozzles.

Decarbonized water coming out through the lower nozzle. For the moisture separation contained in the air flow which coming out of decarbonizer were installed a spray separator.